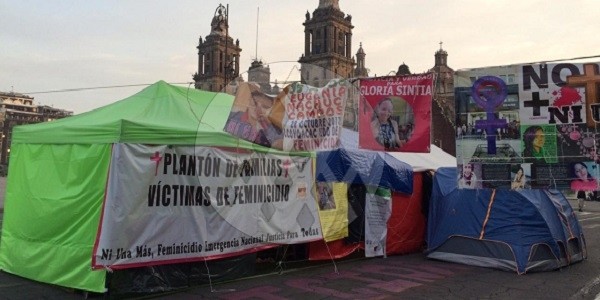 Relatives of feminicide victims accompanied by a group of feminists protested at the National Palace demanding an audience with President Andrés Manuel López Obrador since they mentioned that it is he who should provide them with a solution.

After marching from their camp in Plaza de la Constitución to gate 1 on Calle de Moneda, the protesters began the demonstration and the acts of protest smashing windows, painting pints and announcing their demands through a loudspeaker; likewise, they mentioned that the president must attend to them and not the National Commission to Prevent and Eradicate violence against Women.

On the way back to their camp, the contingent was detained by a group of policemen who, after dialoguing with the protesters, accompanied them to the Plaza de la Constitución circuit, after painting silhouettes of some of the participants in the vehicular stream simulating a crime scene. The demonstration ended.