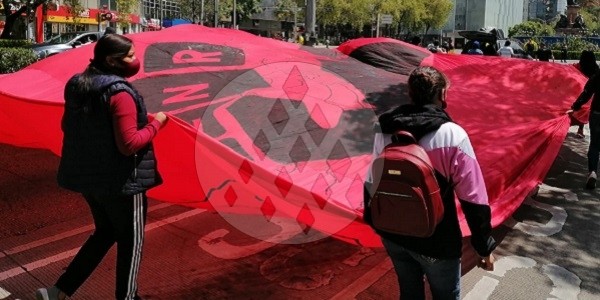 Members of the Front of Rural Normal Graduates (FENR) held a march from the Angel of Independence to the Offices of the System for the Career of Teachers and Teachers to demonstrate against the privatization of public education among other demands.

From 10 in the morning the protesters gathered at the Angel of Independence located at the intersection of Paseo de la Reforma and Florencia in the Juárez neighborhood and at 11 o’clock they left for Donceles number 100 in the Historic Center. During their passage they also demanded the closure of the normal schools in the country and a halt to student repression, respect for the union members, job stability for graduates of rural norms and the reopening of the Mexe boarding school in the state of Hidalgo.

It should be noted that during the demonstration, elements of the Secretariat for Citizen Security made the pertinent cuts in Paseo de la Reforma, Eje Central and Insurgentes, and they also streamlined circulation in the streets surrounding the affected points.