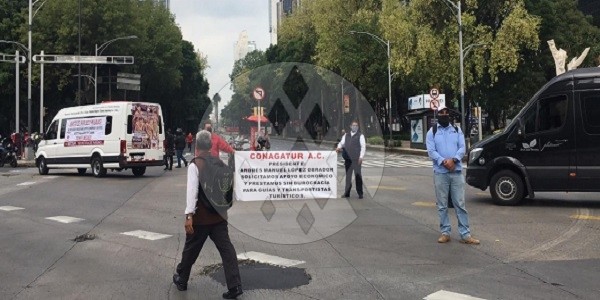 Despite the fact that Mexico City is at an orange traffic light and with the possibility of turning red, protesters gathered at various points in the capital to ask for support from President Andrés Manuel López Obrador.

In the first place, residents of the town of San Baltazar Loxicha Pochutla in Oaxaca demanded that the federal government respect the “uses and customs” of their entity, and also denounced acts of corruption by the municipal authorities of that town, since, according to them, it has also violated their rights. The discontents protested on Calle Moneda in front of the National Palace.

While operators and tour guides blocked both directions of Paseo de la Reforma at Calle Génova and demanded financial support to cope with the pandemic, after a few minutes they withdrew from the scene.

Finally, Mrs. Laura lives in the town of Santa Cruz Acalpixtla in Xochimilco and, almost three years after the earthquake, she comments that no authority has given support, so she decided to chain herself to a post in front of the National Palace.